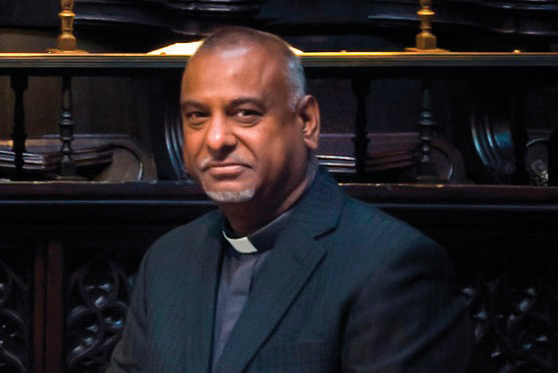 Rogers Govender was appointed the Dean of Manchester in January 2006 after spending over twenty years as a parish priest in South Africa and Manchester.

His role at the Cathedral has involved major fabric interventions and repairs as well as extensive change management of the outreach ministry of the Cathedral as Mother Church of the Diocese of Manchester. He has spearheaded the outreach to other faith communities and the statutory sector and community groups. The Cathedral is now known for its reputation as a place of gathering for the entire community without exception. This has placed the Cathedral at the centre of religious and civic life of the city.

Rogers has a special interest in leadership development and is a regular speaker at Common Purpose and other community events. He is a founding trustee of We Stand Together, a member of Manchester Climate Change Board, and First Patron of The Booth Centre for homelessness and Patron of CAHN (Caribbean & African Health Network for Manchester). He is also a member of Our Manchester, the representative group responsible for setting the ten year strategy for the development of the City of Manchester. His community activities include Modern Slavery, Our Faith Our Planet, and the Peace and Unity initiative which seeks to bring together a culturally diverse group to celebrate our unity and build cohesion in the city. Rogers also chairs the Challenging Hate Forum which was established over a decade ago.

In recognition of his role in the City of Manchester and his Inter-faith work Rogers was awarded a MBE in the 2018 Queen’s New Year Honours List.

Rogers is passionate in promoting diversity in our society and does this through networking and partnership working. He believes that the Church and religion in general, can make a positive difference in society and in through these means he seeks to build alliances across various groups to add value to our common life.

We use cookies to track site usage and to improve your experience. You can disable the use of these at any time. Find out more.